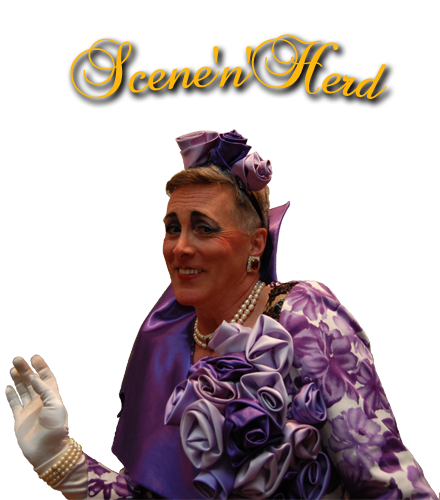 Darlings!!!! I had the most “loverley” late night snack at Cherry Grove’s TOP OF THE BAY Restaurant last night!!! A certain famous ex-Empress (oops! We don’t say ‘EX’…we say ‘FORMER’ Empress!), the wonderfully talented and radiant Philomena has become the Empress of Delectable Delights on Fire Island! Her reputation in the sweets department has spread far and wide…even the muscle-boys-on-strict-diets in the Pines swoon for her chocolate cake!!! Well, we got a chance to sample her cheese cake, and let me tell you, there is nothing more frustrating than having Bill Ottignon and Fabio Gorgissimo INHALE the entire dessert before I even lifted my fork!!! Tables 6 and 8 on either side of us even tried to get into the act! It seems it was the last piece! Light, but densely flavorful, rich, but somehow refreshing, it was without doubt one of the best cheesecakes I’ve ever tasted!!….well, the ONE bite I managed to wrestle free from the marauders….and of course, what I was able to lick off the plate!!)….and then who comes over to my table to console me, but the Delicious Doreen Katen!!! We dished and dissed the menfolk, and discussed our mutual ventures for the 2012 season in our neighboring kingdoms, and we decided there should be much more cross-pollination between the PINES and CHERRY GROVE. I was reminded of the Katharine Hepburn quote about Astaire and Rogers, “He gives her class, and she gives him sex appeal.”…it’s kind of that way about the Grove and the Pines, isn’t it??…..but of course you’ll never catch me saying which is which!!!!

This entry was posted in Uncategorized. Bookmark the permalink.