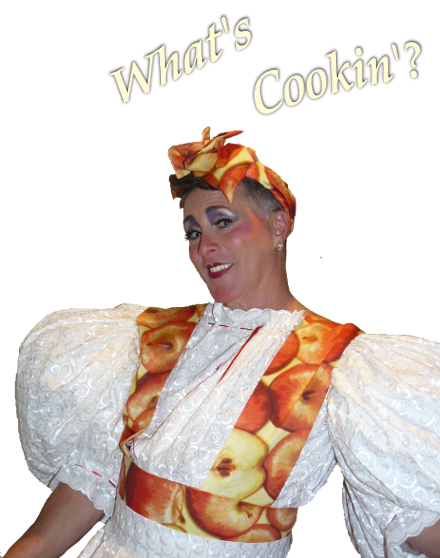 In Bed With The Cooking Shows……….

Darlings! There’s nothing like being laid up in bed during a devastating heat wave to make you turn the air conditioning down to 50 degrees, order in lots of great treats, and get caught up on your cooking shows!!! First of all, the bad news!! Why is Paula Dean’s accent getting heavier and heavier??? She now pronounces her own last name with 3 syllables….”Day-a-ahn”!!! And why does she have to cross her eyes like a conked-out Wiley Coyote whenever she tastes her own “stick-abutta” recipes?? I’m interested to know if the Food Network empire is just going to dig Mel Blanc back up and do her show as a full-out cartoon! With Daffy Duck and Tweety Bird as either her guests..or her Southern Fraaahed entrees! Thhhuffferin Thuckotash……and SPEAKING of lisps! Is Michael Chiarello ever going to get that fixed??…or just come out of the closet! He seems cute and sweet enough, but cute ‘n’ sweet like your favorite hairdresser….or a man who throws birthday parties for other people’s children! And he’s Italian, right? What’s with the odd pronunciations of Italian dishes? The proper pronunciation for bruschetta is “broo-SKEH-tah”, (I actually dated a Bruce Sketta in college! He was a Yale man!), or the Americanized pronunciation is “broo-SHEH-tah.” But Michael wants it BOTH ways!!! “broo-SHketta”….it sounds like some drag queen from Boca Raton!!!….And speaking of wild pronunciations!!! Can Giada exaggerate her versions of Italian words any more than she already does?…or open her mouth any wider???? We get it!!! We GET IT!!! You have 88 teeth, your grandfather was a famous film producer, and you’re Italian!! But do you really have to stop every sentence dead in its tracks so you can turn the word “spaghetti” into a five-act opera projected through your nose? You have won the official Alex-Trebek-Accent-Excellence Award of the Food Network! But if you’re going to go that far every time, you better start calling Paris “Pah-REE” and Rome “RRRO-mah”! Now for some good news: Laura Calder on FRENCH FOOD AT HOME is so natural and easy. Slightly naughty (without being lurid like Nigella skulking around the house in the middle of the night!), learned (without being condescending like Alton Brown!…..so smarmy and snarky, especially with THAT HAIR!!), and charming (without being Stepford-y like Ree Drummond in The Pioneer Woman!!). Try making her dishes! They’re terrific! And that little hint of Eastern Canadian accent is just enough to flavor the food and the 1/2 hour visit! Bon Appetit!!….(oh Julia! Where are you when we need you???)

This entry was posted in Uncategorized. Bookmark the permalink.